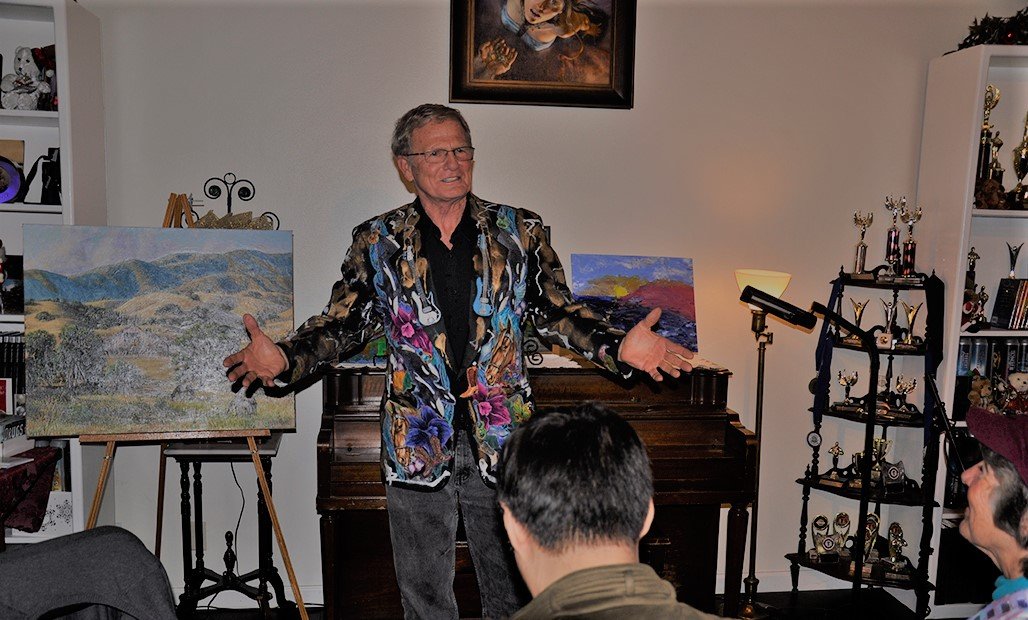 Artists for a Better World had a big year of expansion in 2019!

On Dec 28, 2019 there was a Holiday party at the Sunland Mission and home of AFABW members Richard and Susan Stewart to celebrate!
Richard was the evenings host, and welcomed everyone wearing a colorful jacket painted with guitars. He acknowledged AFABW and the importance of artists by reciting a quote by L. Ron Hubbard who states “A culture is only as great as its dreams and its dreams are dreamed by artists.”

Richard then introduced AFABW founder, Barbara Cordova Oliver. Barbara talked briefly about the history of AFABW, which she started in 1997, with the purpose to unite artists and create a better world through aesthetics and social betterment. She then gave a recap of 2019 and key products that include the following:

*AFABW Mail list of artist contacts went from 300 to 640
*Paid membership program started last April, now with 45 paid members – members get benefits, and are low cost, and help fund the group’s activities and expansion.
*Over 500 people visited AFABW booths at 4 fairs they took part in, with over 1000 promo pieces and brochures out about the group. Over 200 people filled out surveys, and want to take part in our activities.
*400 The Way to Happiness books handed out (with custom covers of AFABW members art work) – TWTH is a common sense moral guide.
*300 Drug Free World books handed out, that educate people on the dangers of drugs.
*Press and Media:
-AFABW Member Carmelita Pittman has a show on EZ Way radio that goes out to over 1 million. 4 AFABW members were guests on the shows.
– Newspaper articles on our various events in The Foothill Record (2X), Crescenta Valley weekly (2X), Shadow Hills Property Owners Assoc paper, and The Needs and Wants.
*Numerous posts on Facebook, about our events and activities that were seen and liked by thousands. We tripled our FB group membership. We also launched an Instagram page that has gotten hundreds of likes and comments.
*A new AFABW Children’s book was released by Richard and Mary Rensberry entitled The Quest We Share on Quick Turtle books. It’s available on Amazon.com
*We have had monthly meetings since Feb 2019 where we coordinate on our activities, welcome new artists and members – and at each meeting the attendees also share their own creative projects and network with one another.
Community events: We have gone to art fairs and music showcases in the community and met a number of like- minded artists and invited them to participate in our events. – Some of the artists at the Holiday party were contacts from such events.

Founding member Lynda Hubbard spoke about the seminar she delivered in August on How to Successfully sell your Art. It was a big success, with artists equipped with new tools to get their products. She talked about her plans for future seminars she will deliver in 2020.

*World Art Day:
Founding member Becky Mate talked about the World Art Day events and activities that occurred in April 2019 – She started out with an introduction and stated that In 1998 she decided there needed to be a holiday to recognize the value of arts and artists, and started hosting Art Day events every year. Just this past year she changed the date of her holiday to join with World Art Day on April 15th in honor of DaVinci’s Birthday. –

Becky hosted an event at her home with a variety of artists, musicians and writers. Becky always encourages kids to do something for the holiday, and this year several young students at Plainview Elementary school in Sunland did drawings in honor of the holiday that were on display at her party.

Barbara produced another event at the Church of Scientology of Pasadena on the walkway by this historic building, which was adorned with art and embellished with the music of the Happiness Band. – Passers by viewed the art and were handed fliers wishing them “Happy World Art Day” along with The Way to Happiness books with custom covers created by AFABW artists.

In keeping with the tradition of the holiday, several artists throughout the USA did something special in honor of World Art day, and sent write ups on their activities to Becky to post on FB and put in a press release. Becky ended off by reading an original poem entitled “The night before World art day” – akin to the night before Xmas but for artists.

At the Holiday Party there was also art on display by visual artists that include: Nico Vosloo, Wayne Weberbauer, Diane Bernstein, Karen Sachs and Becky Mate.

After the talks there was entertainment that was kicked off by AFABW’s youngest member -10 year old Zach Maravilla. He sang Somewhere Over the Rainbow while accompanying himself on ukulele.

The following also performed:
Masami Asahina – played an original composition on the piano
Lallah Rowe – Read an original story about a mouse who felt Santa was neglecting mice on Christmas
Greg Bartheld – Performed an improvised song on piano
Javier Medra – Performed 2 original songs from his books “Sing with my Dog” and “Sing with my cat”
Dave Fauser – Read an original poem
Barbara Cordova – Played guitar and sang 2 original songs backed by Rob Oliver on bass
Pete Martinez – Played an original song on guitar
Tim Corbo – Ended the evening by playing guitar and singing “Everything’s gonna be all right” by Bob Marley and was accompanied by Zach on Ukelele and Pete on vocals – The whole audience joined in on the chorus.

Feedback from some attendees:
“What a great energy from the group yesterday! We would like to say thank you very much to you.” Masami Asahina
“I was sad to leave such a lovely party. Loved the entertainment! I made posts about some of the artists there on Facebook to show their work.- Very well done” – Diane Bernstein
“Dear Barbara and Rob, thank you so very much for your care, support, generosity, aesthetics that you continue to share with us all. You are definitely creating a Renaissance and a New Civilization through your ongoing actions. Thank you for persisting and helping so many other Artists. Carl Urbin
“Very nice event last night!. So glad we had the piano tuned for all that lovely music!” Richard Stewart
Those helping with the event production: Barbara Cordova Oliver (Producer), Lallah Rowe (Deputy Producer) Chris Rowe and Rob Oliver (Set ups) Richard Stewart and Susan Stewart, (Hosts) Marshall Swerman (photographer) 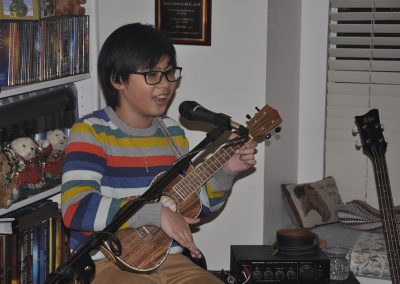 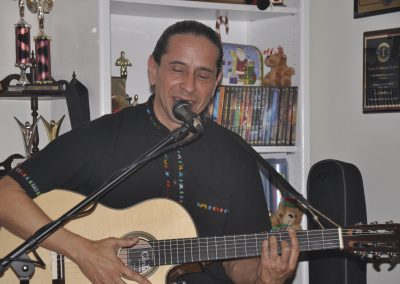 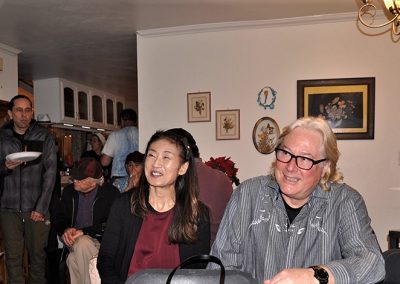